She may be busy being a triple threat these days, but Julianne Hough knows how to kick back and relax as well.

Besides professionally dancing, singing and starring alongside Hollywood hunks Tom Cruiseand Josh Duhamel on the silver screen, the blonde bombshell loves nothing but to frolic among the surf by the shore.

Seeing how it is her 25th birthday Saturday, Celebuzz is looking back Hough’s best beach bum looks, because, why not?

Launch the gallery about for some of her sexiest bikini styles!

Over the years, it’s been harder and harder to spot the songstress wearing anything but a two-piece as she travels with world with husband, Eddie Cibrian. Whether she’s on vacation or just hanging around her home, the country crooner simply can’t fight the urge to slip into a little something sexy.

In fact, she threw a pre-birthday luau over the weekend in – you guessed it – a bikini. Here’s to another year of hotness!

The songstress kicked off her Stars Dance Tour this week rocking some seriously sexy fashion. Though she wowed in a plethora of skimpy outfits, there was a specific white-hot getup that strangely resembled the one the Biebs had been rocking on his Believe Tour.

Yes, it was those dang saggy leather pants.

So, who rocked this looks best? Cast your vote in the poll, below.

Miley Cyrus is a serious fan of grills. So much so that she carries not one around in her purse, but three!

The 20-year-old performer recently sat down on Harper’s Bazaar’s The Look to discuss her outrageous fashion sense, including her love of blinged out dental accessories.

Miley talked to executive editor Laura Brown about her evolving style, explaining, “It’s kind of just been like an organic thing. As I take more control of my life, people are following that and I think people are inspired to see someone young and taking control of what they know that they like. And I think people are wanting to see more of that right now or wanting to see someone with a real clear vision of what they are.”

Brown went on to show Cyrus a photo of her last Harper’s Bazaar shoot, where a long-haired, 17-year-old Miley is seen rocking a much softer look, carrying a guitar in a field. “That’s my Nashville life. That’s my simple life,” Miley remarks.

The singer also talked about her ultimate style icons, saying, “I’ve been obsessed with the Olsen twins since I was five.”

As for what she “can’t stop” at the moment? “I should probably stop eating the way I’ve been eating the past few weeks, because usually I’m real healthy,” she says. The young star went on to admit she’s been craving “Philly cheesesteaks.”

Miley also gave Harper’s Bazaar a peek inside her purse, revealing that she carries three grills around, including her “chic” one and her “chill” one. Ah, to have a grill for any occasion.

Watch Miley talk style, grills, her famous haircut and more in the fun video, above.

This photo of Britney Spears and Katy Perry meeting at the Smurfs 2 premiere is my everything.

On Sunday, the pop princess and the California Girl were spotted greeting each other on the blue carpet (yes, blue) as Perry’s film premiered in Westwood, Calif. (It’s sort of Spears’ film too, as “Ooh La La” appears on the soundtrack).

And thank goodness for social media, because it looks like this is just the beginning of a beautiful friendship.

So great to see you Smurfette @katyperry! Can’t wait for our Vegas date… pic.twitter.com/ksyZuuNBV5

Today, one of the world’s busiest airports helped celebrate the arrival of the Prince of Cambridge.

A team at Heathrow handed out complimentary tees “Celebrating A Very Special New Arrival” to the first 1,000 passengers in each of its terminals, along with a gift tin including some proper British treats (Twinings Tea and Walkers shortbread biscuits. I know.)

Passengers landing back in England were gifted with the limited-edition set in arrivals. Those leaving were given the tee and tin as a parting gift, a reminder of Baby Cambridge’s birthday.

The team handing out the goods spoke over 50 languages between them, and for those homesick Yanks, American accents were available on request.

Long Live The Future Heir, as well as your t-shirt and biscuit tin. 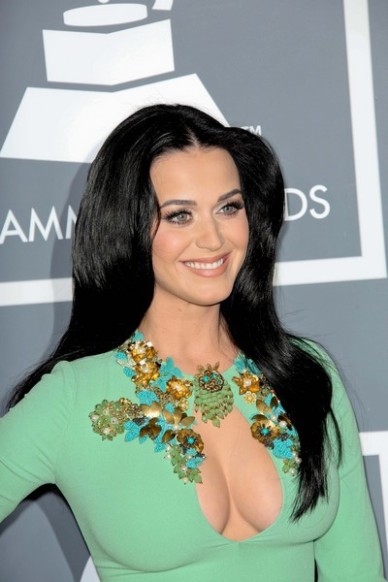 It’s February and awards season is in full swing with lots of stars hitting the red carpet. The numerous events going on not only include awards but also parties, premieres as well as the annual Mercedes Fashion Week in New York City. This week was highlighted by the 55th annual Grammy awards, where we saw lots of fashion hits, as well as some outrageous misses (maybe they were just looking for attention). Katy Perry and a few others obviously missed the memo by Grammy officials (see above). None the less, ALL the stars were out and about at the Grammy arrivals, as well as the multitude of after parties.

Check out our full photo gallery of the 55th Grammy red carpet arrivals.

Come with us and revisit some of the red carpet highlights from this week.

1 of 5Next pagePhoto Credits: PR Photos