Surrounded by a neon animal print border, the 28-year-old singer shows off a tiger-emblazoned satin jacket for the stylized shot. We’re getting more ’80s hair band and less modern pop star from this wild art, no?

Katy is known for her candy-coated sex appeal, but she seems to be laying that persona to rest with her upcoming album, PRISM. She has already released three teasers for her new single and they all not-so-subtly tell us that we should expect a new, darker Katy Perry.

“Roar” will be unleashed on August 12th. What do you think of the cover art?

The on again, off again lovebirds’ new duet, “Who You Love,” made its way onto the Internet on Monday. The soft ballad is a little bit country and little bit rock ‘n roll and, well, a little bit sappy.

The sleepy track is heavy on Mayer’s signature bluesy guitar, as well as the lyrics “you love who you love.” (He says that a lot.)

Perry brings in her musical flair mid-track. Her verse includes the tender words, “My boy ain’t the one that I saw coming/ And some have said his heart’s too hard to hold/ And it takes a little time but you should see him when he shines/ Cause you never wanna let the feeling go.”

Katy Perry is already having a huge week. She released her first single off her upcoming album, PRISM (after it was leaked…), and it was just announced that she will be hitting the stage at the 2013 MTV VMAs.

Listen to her song with boyfriend John Mayer, below. Lyrics for the ballad are now available on Directlyrics.

Katy Perry is coming to Brooklyn for the 2013 Video Music Awards and she’s making quite the entrance.

In a new promo for the MTV award show, Katy – dressed almost exactly like one of the leads from The Craft – emerges from a manhole and struts her stuff in front of an animal print-clad gang on the mean streets of NYC.

And since kitty-lover Katy has been running with this whole wild cat theme since she began teasing her new single ‘Roar,’ this spot also features a cameo from a growling tiger.

“SEE YOU AT THE VMA’S. I’M BRINGING MY BIG KATS WITH ME,” the 28-year-old pop star tweeted along with a link to the clip.

Miley Cyrus appeared in a similar video promoting the event, where she is seen chillin’ with some graffiti artists and party people in a subway tunnel. Both of the clips are set to the tune of Beastie Boys’ No Sleep ‘Til Brooklyn.

It was announced on Monday that Perry will perform “Roar” for the first time at MTV’s big August 25th show. Her fourth album, PRISM, is slated for an October 22nd release.

Watch her “Roar” into Brooklyn in the video, above.

There was a time when all we ever heard about Katy and John‘s relationship was how often they split up and got back together. But after over a year of on-and-off dating, it looks like things have finally been going really well in recent months, with the couple getting more and more adorable by the minute-wearing matching outfits, dedicating songs to each other, and recording romantic duets (well, just one so far).

To add to the adorableness, Katy wrote the following tweet for John‘s 36th birthday on October 16:

Katy Perry just released a second teaser for her upcoming single, “Roar,” and this one is even more twisted than the last.

On Friday the songstress unveiled an intriguing video where she can be seen burning her famous blue wig.

This time around the 28-year-old pop star is at a funeral surrounded by tearful attendees (including two screaming fangirls with purple hair and heart headbands), but she doesn’t seem too distraught about the whole death thing. Perry stands behind the coffin, which is decorated with one of her spinning peppermint corsets, sporting black shades and a bad ass knowing smirk.

It looks like Katy is truly ready to let her old image R.I.P.

“Ashes to ashes, dust to dust, a new beginning is a must!” the singer tweeted alongside the link to the new clip.

Say hello to the PRISM-era Perry, because Ms. Teenage Dream just buried her former self.

Are you excited to see a new side of Katy Perry?

KATY PERRY showed some major cleavage in a skintight Gucci gown at the 2013 Grammy Awards, which was held at the Staples Center in Los Angeles on Sunday. 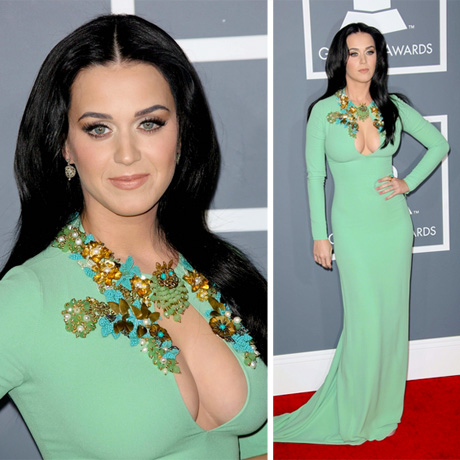 After looking stunning in a gorgeous beaded gown at the Clive Davis‘ Pre-Grammy Gala on Saturday, the brunette beauty, who was nominated for Best Pop Solo Performance for her song “Wide Awake,” showcased another elegant look at the Grammy Awards.

Katy walked the red carpet in a long-sleeved, skintight mint green Gucci gown, which featured a cleavage-baring keyhole bodice and a round neckline adorned with floral beadwork and embellishments.

That’s probably way too much cleavage but… who are we to complain?