Hours after sharing a heartfelt, if long-winded (over 2,200 words!), letter on her website, Christina Aguilera treated her fans to a feel-good, homemade video for “Let There Be Love,” the chart-topping song off her latest album Lotus.

“Hey everybody. Christina here,” she says to open the clip. “Just thanking you guys so much for filling my life and my heart with so much love, continued throughout the years [and] standing by me. I appreciate all your support. This one is just for you.”

The video features Aguilera, with her friends – some famous ones, like Nicole Richie – and family, spreading the message of love and acceptance across L.A., holding up signs like, “Don’t Judge,” “Equality,” and “Racism Sucks,” and throwing up an “L” with their hands. There’s even a bit of cuteness courtesy of her son Max, 5, where he dances his heart out.

Watch the celebratory video, above.

Lyrics for the track are now on Directlyrics.

Looks like everyone went to the UK this week…

Miley Cyrus is across the pond to promote her new music. The “We Can’t Stop” singer took to Twitter to share a photo with some of her UK Smilers, and it looks like these fans were behind bars. Literally.

Rihanna snapped some photos posing in front of some Union Jacks while Vanessa Hudgens got all dressed up for the London premiere of her new movie, The Frozen Ground. She looked gorgeous in a nude body suit which was covered in rhinestones.

Back at home, the stars gave us all the selfies we could want with several of them streaming from the set of their current projects.

Recently, it was announced that Christina Aguilera will be returning to The Voice for Season 5. Xtina took to Twitter to let her fans know that she was “rolling into season 5 – ready to kick it with my boys.” It’s going to be good to see the original judges back together again. Their chemistry is irreplaceable!

Be sure to check out the gallery, above, for the rest of this week’s Twitpics!

Recent star news tells us that CHRISTINA AGUILERA actually comes up on Google search for the key words, “dying grandparents.”

Confused? So are we!

We can imagine Christina Aguilera turning up on any search engine when you look for “‘The Voice’ mentor,” “celebrity weight gain,” “‘Lotus’ 2012 album,” “Adam Levine feud” or even just “your body”… but never for “dying grandparents.”

And yet, she does. 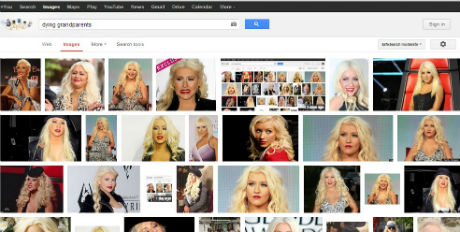 Due to some sort of error in the search and some old articles about the pop star allegedly ignoring her, yes, “dying grandparents” a few months ago, tons of her pictures have been showing up at the very top of Google’s image results when given those two search words.

And we’re guessing she’ll be staying there much, much longer now that this report is being picked up by online tabloids and celebrity gossip websites.

See, they are friends!

Adam Levine has his fare share of comments about Christina Aguilera‘s extra weight-which she insists on showing off by wearing extremely skin-tight bandage dresses on “The Voice” -but the Maroon 5 singer is defending his soon-to-be replaced colleague from her ruthless haters.

Clearly, although the two artist mentors bicker a lot on set, there’s no real feud there.

When asked about the criticism that Aguilera continues to receive about her curvy figure, Levine said during a press event for their show last Friday:

“People shouldn’t say those kinds of things. Because, ‘F**k you.’ Come on, guys. Grow up.”

He went on to note that “people feel like they can just say nasty things about other people,” especially about celebrities.

“[Aguilera] gets a lot of it, which pisses me off, and of course I have her back, of course I defend her.”

Of course he probably doesn’t get much of it considering that he’s always had a perfectly toned and tattooed bod, but he is clearly aware of all the criticism thrown towards celebs. He said:

“I think it’s a really, really ugly part of our culture.”

“It’s not cool, and I’ve never liked it… I think it’s horrible.”

We can’t agree with you more, Adam.

What can you say about him defending Christina‘s body?